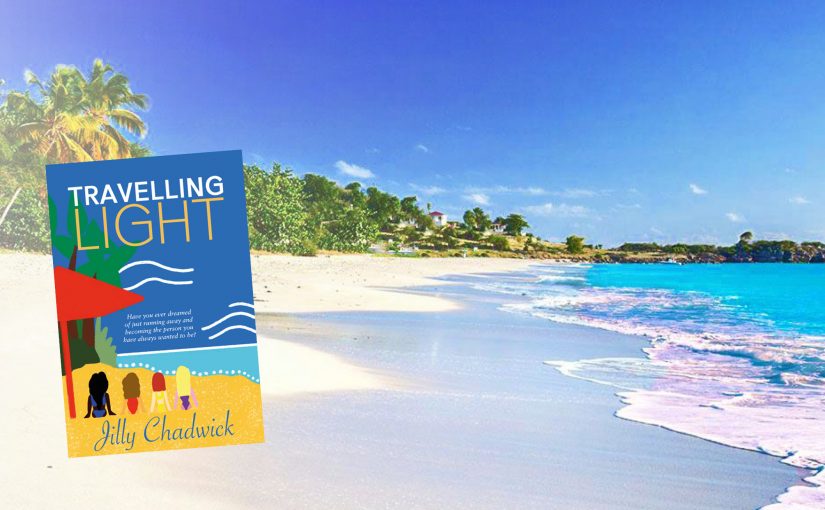 Due out on 1 December – reserve your copy by pre-ordering now!

In her debut novel, Travelling Light, Jilly Chadwick invites you to join her in a Caribbean adventure where four very different women escape to a paradise beach location in Antigua to escape the pain of a series of life-changing events.  Who has never dreamed of just running away and reinventing themselves as the person you have always secretly wanted to be?

Written during the Lockdown, Jilly used a series of her own life events to inspire an adventure like no other!

She has visited Antigua many times and writes with a passion for the laid back way of life in Jolly Harbour, but also of how the actions of others impact us in quite devastating ways. She also explores the depths of how women are stronger than they know and have the ability to rise phoenix-like from the ashes of loss and pain.

Think Jilly Cooper meets Joanne Trollope on a fun, yet at times heartbreaking, trip that leaves you wanting more.

Her book had been on the slow burner for two years ahead of Covid 19, but some enforced time out gave her the push to finish her novel – and inspire other titles which will soon be following in the wake of Travelling Light.

Jilly Chadwick is a former Fleet Street journalist who relocated from London to her Channel Island home where she now lives in a house on the coast.

She launched and edited lifestyle magazines before leaving the corporate world to work for a local mental health charity.

During lockdown she returned to her love of writing and her debut novel is in honour of all women who have ever come back from the brink of heartache and hardships to find the warrior within. 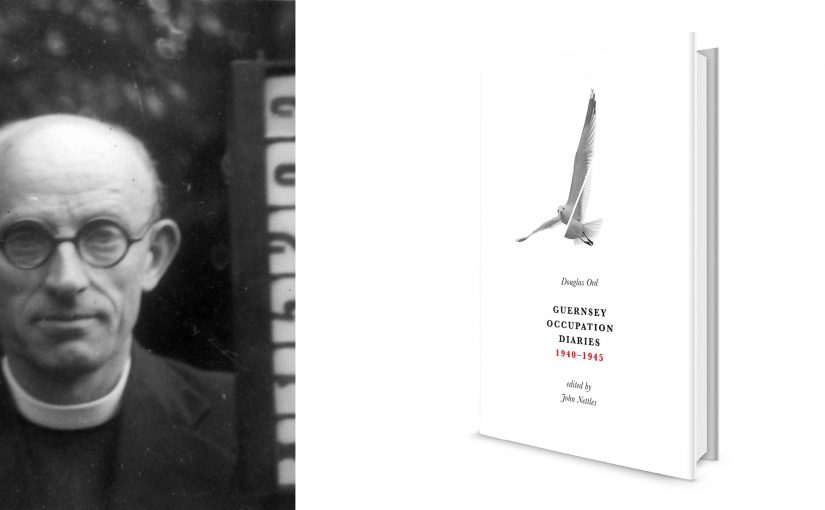 One of the most important primary sources for those interested in the German Occupation of the Channel Islands, the diaries provide a unique insight into this traumatic period of the islands’ history.

John Nettles has edited the diaries and written an introduction. He will be launching the book at a Guernsey Literary Festival event at Beau Sejour on 4 November 2021. For more details see the Literary Festival website.

You can find out more about this work from this short video below.

“This treasure trove of an eyewitness account has always deserved a wider audience and John Nettles has done a stellar job bringing it to us.”

We are excited to announce the latest forthcoming publication from Blue Ormer. A Glossary of the Norman Language in the Channel Islands, compiled and edited by Professor Mari Jones of the University of Cambridge, based on fieldnotes made by Professor J.P. Collas almost a century ago.

For the first time, we are offering the opportunity to join a crowdfunding initiative to support the launch of this important addition to the literature on the Norman languages of the Channel Islands: Guernésiais, Jèrriais, Sercquiais and Auregnais.

There are four subscription options:-

END_OF_DOCUMENT_TOKEN_TO_BE_REPLACED

There are four subscription options:-

END_OF_DOCUMENT_TOKEN_TO_BE_REPLACED 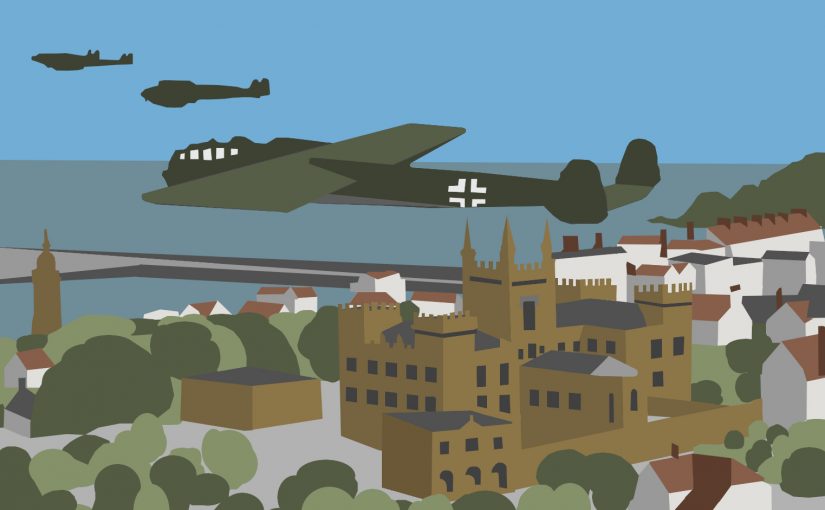 We are pleased to announce our latest publication – a book about the German Occupation of the Bailiwick of Guernsey.

Written by local tour guide, Victoria Robinson, this beautifully illustrated book provides a general introduction to this subject for primary school children. It has already received positive feedback from children, parents and teachers.

… a pretty useful and good resource for the Occupation.

On the 30th June 1940, life in the Bailiwick of Guernsey changed completely when German forces landed and occupied the island. For five long years, the islanders faced life under enemy rule bringing with it danger, hardship and heartbreak.

Discover the stories of daily life during the occupation, living under strict rules and watching out for German soldiers at every turn.

Find out about the main events of the period including evacuation, daring commando raids, listening to secret radios, building fortifications, deportations, facing food shortages, curfews and transport challenges – and, finally, the joy of liberation – all brought to life through colourful illustrations.

Victoria Robinson is a Guernsey born and bred accredited tour guide with a passion for the island’s history and sharing it with others.

If you’re looking to make use of the time during the lockdown by catching up on your reading, or learning more about the Channel Islands – then you’ve come to the right place!

Blue Ormer published a range of local books – and the store also includes a number of other books of local interest, including the entire catalogue of Toucan Press.

Don’t forget – free postage in the Bailiwick of Guernsey!

Special offer – 10% discount by using the code LOCKDOWN10 at checkout.

This exciting new book commemorates and celebrates the 75th anniversary of the liberation of the Channel Islands, after the occupation of the invading German forces during WW2. Stories of the occupation continue to inspire generations of artists, poets, historians and writers.

In Living Memory is a collection of contemporary visual arts, original essays and poetry, plus first-hand memories of those who survive the war years and wish to share their memories – some for the very first time.

Heartfelt stories and images,
together commemorating
the freedom we enjoy today.

Dame Mary Perkins in her Preface

Foreword by Dame Mary Perkins and Introduction by Molly Bihet.

All proceeds to Age Concern in Guernsey and Alderney.

UPDATE: Due to the Coronavirus pandemic the unveiling of the blue plaque has been postponed until Spring 2021.

To coincide with this event, his memoirs, Across the Channel, which he wrote in the 1960s, but have never been published, were due to be launched at the Guernsey Literary Festival. However, the book is now available here.

The book describes his remarkable career from commanding the 10th Essex Regiment in WW1, becoming the first Director-General of the Post Office, Permanent Secretary to the Air Ministry, and his service in WW2 from his evacuation from Boulogne as part of the British Expeditionary Force to the Petroleum Warfare Department, responsible for the innovative application of the nation’s fuel stocks to the war effort, such as FIDO (fog dispersal at airfields) and PLUTO (pipeline under the ocean).

You can order your copy using the link below.

More details of the rescheduling of the blue plaque will be found at the Heritage 75 Festival website once a new date has been arranged.

We are pleased to announce a special offer on Gilly Carr’s latest book Victims of Nazi Persecution in the Channel Islands: A Legitimate Heritage?

The recommended retail price is £90 for this hardback book from Bloomsbury Academic – but we have negotiated a special discounted price of £25 which is only available to residents of the Channel Islands.

Gilly’s latest book explores the long-term effects of Nazi persecution on the Channel Islands’ political prisoners during the German Occupation of World War II. It also examines the long-term neglect of their heritage and memory by both national and local governments since 1945.

The three-part book starts with the wartime experience of islanders in Nazi prisons and camps based on their own testimonies and examines the reception they faced on their return. The second part explores the compensation claims period of the 1960s, the role of Frank Falla, and the way political prisoners were actively excluded from the narrative of the occupation by the local authorities. The third part takes us from the 1960s to the present, looking at the fight for recognition by local ‘guardians of memory’ and the activism of ‘game changers’. The book finishes by examining the status quo today.

Gilly Carr is Senior Lecturer and Academic Director in Archaeology at the Institute of Continuing Education at the University of Cambridge. She has carried out extensive research into the Channel Island Victims of Nazi Persecution and has published extensively on this subject. Gilly established the Frank Falla Archive in 2017 to commemorate the Channel Islands Victims of Nazi Persecution.

The second book we will be launching at this year’s festival is the second part of Gregory Stevens Cox’s trilogy about Victor Hugo’s exile in the Channel Islands – Victor Hugo Explores Guernsey.

It’s only three weeks away now, and tickets are selling fast – so book your place soon – using this link to the Guernsey Literary Festival website.

His early explorations informed his essay  L’Archipel de la Manche – intended as an introduction to The Toilers of the Sea.

Victor Hugo Explores Guernsey (extensively illustrated with images of the period) follows the routes that Hugo took, the diversions he made, and relates them to his writings..

Gregory Stevens Cox has spent over fifty years researching Victor Hugo’s life in the Channel Islands. He has written five monographs on Victor Hugo’s exile and was one of the founders of the Victor Hugo in Guernsey Society.

This year’s programme is now fully announced and the brochures have hit doorsteps of everyone on the island. We are delighted to be supporting the festival again this year – with the launch of two new books.

The first of these is: Mervyn Peake: Son of Sark, by Steve Foote.

Mervyn Peake (1911–1968), is widely considered to be one of the twentieth century’s most original and innovative novelists, poets and artists. He is best known for the Gormenghast trilogy.

Peake lived in Sark during two formative stages of his life: during the 1930s as a single man, where he joined an artists’ colony known as The Sark Group and between 1947 and 1950 when he returned to the island with his young family.