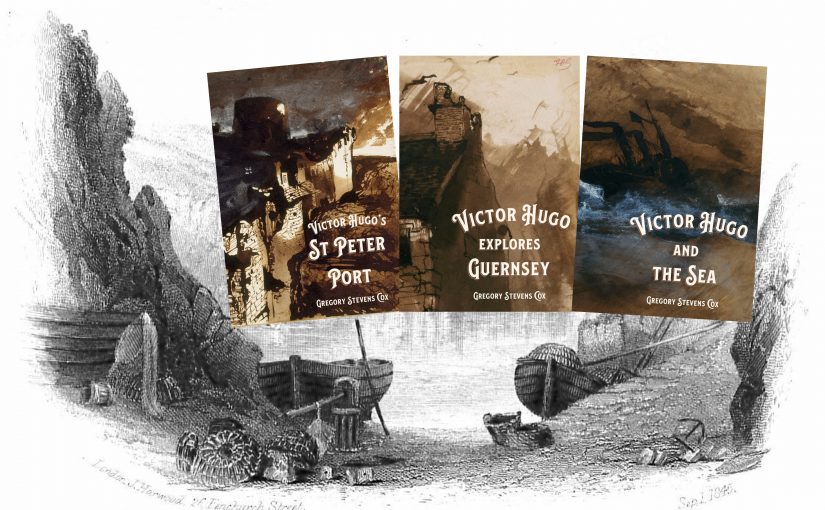 Between 1855 and 1870, Victor Hugo, the great French writer, lived in exile in Guernsey. Much has been written about his home, Hauteville House, which he acquired in 1856 and decorated himself, creating another kind of art.

Gregory Stevens Cox, working in collaboration with Steve Foote, has now compiled three monographs examining Victor Hugo’s exile. Cox’s aim has been to explore Hugo’s relationship with the island of Guernsey and with its people – le noble petit de la – to whom he dedicated his novel Toilers of the Sea.

Far from being a recluse in Hauteville House, Hugo regularly went to town and enjoyed the company of Guernsey people.

Follow him as he buys pens, ink, paper, pottery, porcelain. Meet the postmaster who tried to swindle him. Encounter the hairdresser whose face was eaten by a ‘wolf’.

Visit Picquet House which received telegraph message for him. Enter the church where he witnessed a baptism. Tread the streets that Hugo knew and immortalised.

During his fifteen years of exile in Guernsey (1855-1870) Hugo walked the length and breadth of the island, familiarising himself with its landscape, antiquities, folklore, and traditions. In the latter years of exile he made 350 excursions by carriage to the country parishes. His explorations informed his essay  L’Archipel de la Manche – the introduction to The Toilers of the Sea.

Victor Hugo Explores Guernsey (extensively illustrated with images of the period) follows the routes that Hugo took, the diversions he made, and relates them to his writings.

Victor Hugo and the Sea

At the start of his exile, Hugo set himself a grand project – to study l’Océan.

He threw himself into the project with enthusiasm. From sailors and fishermen he learned about the tides, currents, perils, and creatures of the seas; he studied maritime charts, tide-tables, and marker buoys; he inspected a wreck, researched lighthouses, donated life-saving equipment to a harbourmaster, grieved for the widows and children of drowned sailors.

He wove his knowledge, sentiments, and observations into his poetry and into two great novels – The Toilers of the Sea and By Order of the King.

This is the third book in Gregory Stevens Cox’s trilogy examining the Guernsey dimension in Hugo’s life and art.

To be launched at the Victor Hugo in Guernsey conference, June 2019.