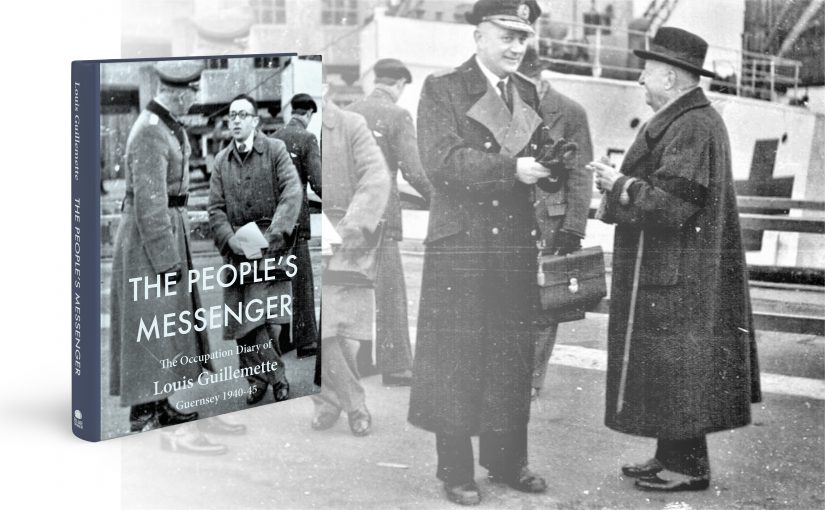 Since the Liberation of the Channel Islands from German Occupation in 1945, there have been many Occupation diaries published. But there have been few accounts written by those who were at the heart of the Island’s government during those bleak years.

From the disputes over German requisitions of houses and radio sets to the increasingly tense negotiations over deportations and food and fuel rations – Louis’s diary complements the official records of these meetings. In each entry, he recorded what was going on behind the scenes, the news he had heard on his forbidden radio, as well as his activities with family and friends as they strove to survive and distract themselves from the challenges which the Occupation brought to their domestic and social lives.

Louis Guillemette OBE (1910-1977) was born in Guernsey and was educated at the States Intermediate School and later was awarded a scholarship to Elizabeth College. On leaving school, he joined the civil service of the States of Guernsey.

At the outbreak of World War 2, he was Assistant Secretary to the Bailiff. When the States established the Controlling Committee in 1940, Louis was appointed Secretary to its President, a position which he held throughout the Occupation. In 1948 he was promoted to States Supervisor, the head of the civil service, and continued in this role until his retirement in 1975. He was a keen sailor and a talented musician. He died of a heart attack aboard his beloved boat, Albatross, in 1977 at the age of 67 years.

What people are saying about The People’s Messenger:

Louis Guillemette relates the inside story of how the Government of our small island responded to German Occupation, showing how perseverance in negotiation with an omnipotent enemy helped Guernsey survive. He also depicts a young couple enduring adversity and enjoying their firstborn.

Louis Guillemette’s diary telling of the German Occupation in Guernsey is written with such engaging intelligence, insight and humanity as to make it a very special work indeed. Fascinating to read, impossible to overestimate, it has to be the best of the best of Occupation diaries.

I am thrilled that my father’s diary is at last being published. Louis and Queenie were my doting and caring parents when I arrived at this difficult time, in August 1942. This diary will appeal to anyone who wants to read The Real Unadulterated version of the German Occupation of the Channel Islands, 1940-1945.

Arguably the most important and revealing diary kept during the German Occupation of the islands.