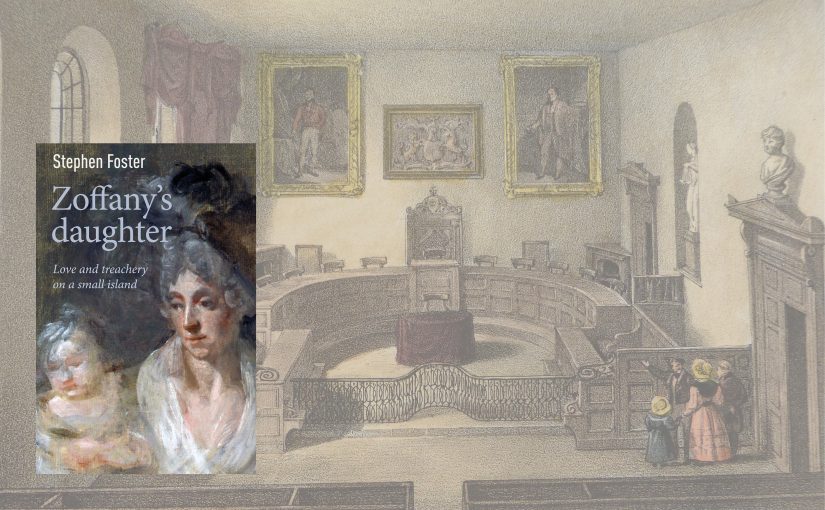 Love and Treachery on a Small Island

‘I am only obeying the law that Nature has engraved indelibly in the heart of a mother, to never be separated from her child.’

2nd July 1825: Cecilia Zoffany, daughter of a famous artist, flees to the island of Guernsey with her two young daughters, one of them disguised as a boy. Alone and distressed, the beautiful stranger seeks the help of locals in a desperate attempt to retain the custody of her children. Her estranged husband, a London clergyman, follows close behind.

Time is running out for Cecilia and everyone is watching. A mother’s love stands defiantly against the absolute rights of a father. The Royal Court of Guernsey is called upon to adjudicate. The press, local gossips and her apparent new friends all have their say. Whom can Cecilia trust? And, given the evidence, why should we trust her? Meanwhile, Cecilia’s elder daughter confides in her diary …

This is a true story. But how much of it should we believe?

Find out more at www.zoffanysdaughter.com.

A gripping tale of love and intrigue with many unexpected twists and turns which play with the sympathies and emotions of the reader. The story is told through contemporaneous reports and statements, and vividly through the imagined diary of one of the main participants. Added realism comes from the setting in old St Peter Port, which has changed little in the ensuing years. As an account of family discord and court battles, the story is painfully familiar.

Having discovered an intriguing story, Stephen Foster researched it diligently and fashioned an ingenious way to tell it. His book has many layers – biography, social history, Guernsey culture, art theory, historiography…. He brings the past alive, entertains and educates, and leaves the reader thinking. Literary groups will have enormous fun discussing this elegant volume.

Stephen Foster is an Australian historian who has spent much of his career at the borders of academic and public history. His books include A Private Empire, which was short-listed for the Ernest Scott Prize for History and the Victorian Premier’s Literary Awards, and (as co-author) The Making of the Australian National University, which has been described as ‘a model university history’.